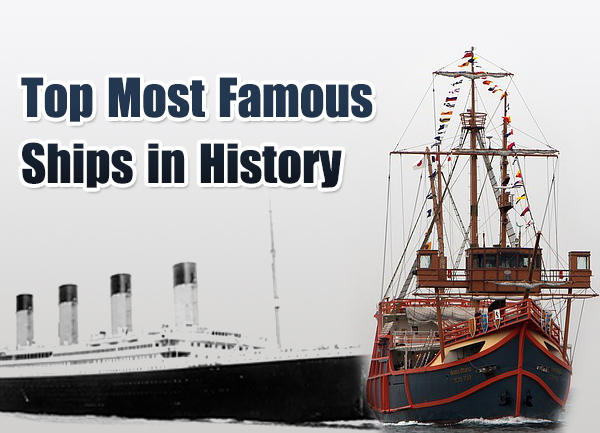 There are many ships which have made the history books for many reasons, from wars to military to civilian. Ships being the symbol of a country’s power haven’t pretty much changed since the ancient times. Moreover, ships have been important means of transport for goods, passengers, expeditions and trade throughout centuries, ever since man discovered the utility of this watercraft. Over many centuries countless ships have been built but a few of them have left an enduring impact.

Let us check out some of the top famous ships in history that made their mark on the world. A list of historically famous ships is not complete without mentioning the ill-fated RMS Titanic. She sank in the North Atlantic Ocean during her maiden voyage in early morning of April 15, 1912 after she was hit by a massive iceberg. Although the death toll remains unclear, it is thought to be between 1,490 and 1,653 people.

RMS Titanic was the largest ship created in its time, with a supposed claim of being “practically unsinkable” in an engineering journal. The ship’s grand construction, size, capacity and the vessel being the last recorded occurrence of life lost at sea due to an iceberg hit are what contribute to its historical fame.

The USS Arizona was a US Navy battleship constructed in 1913, a year just before World War I. However, her active life during the World War II was short-lived when she was struck by a Japanese bomb during the Pearl Harbor attack in December 1941. All 1,177 officers and crew members perished by the violent explosion.

The Pennsylvania-class battleship was named so in order to honor the addition of the 48th state, i.e. Arizona, into the union. USS Arizona Memorial was built to commemorate and mark the resting place of the battleship at Pearl Harbor in Honolulu in Hawaii.

This German battleship was named after Chancellor Otto van Bismarck, a German influential statesman. It was built for the Kriegsmarine of Nazi Germany, one of the largest ever built by Germany.

When the German battleship Bismarck was commissioned into the fleet just after the start of the World War II, the British began to fear the possibility of her interrupting sea lanes for transport.

Intending to wipe out the British ships in May 1941, the Bismarck engaged and destroyed the HMS Hood, and attacked the HMS Prince of Wales which forced to send herself home. Bismarck herself was attacked by the British aerial torpedoes. Severely damaged, she raced to occupied France for repairs, but she was relentlessly pursued and launched with a two-hour attack by the British battleships, Rodney and King George V, both of which managed to down Bismarck to the bottom of the ocean. All but 114 of the 2,200 crew died.

The USS Maine was one of the first US battleships to be built. Her self-explosion and destruction in 1898 served as a catalyst in causing war between the United States and Spain. Maine ‘s destruction and loss brought a terrible shock to the country as she was practically considered the best that the US naval shipbuilding had to offer — although she was a bit outdated (as it took her almost nine years to complete) compared to the newer models that came out at that time.

The ship exploded in Cuba’s Havana harbor, tearing herself in two and sinking down to the ocean just within minutes, killing all but 89 of the 355-man personnel. The cause of the explosion is still a mystery, although it has been rumored that accidental detonation or even a sabotage that probably sent the ship sinking. This ship explosion was a trigger for the Spanish-American war due to the Cuban crisis. Although initially Spain was blamed for the explosion, yet naval investigation decades later concluded that the incident likely occurred due to ignition of ammunition stocks.

This battleship, launched in May 1765, became one of the biggest and most powerful wooden warships of its time. She has a long and colorful history as she served as the flagship of Admiral Lord Nelson during the legendary Battle of Trafalgar (1805), which successfully helped prevent England from being invaded by France and Spain. She also fought gallantly in many other wars such as the Battle of Cape St. Vincent and the first and second battles of Ushant.

HMS Victory is the only first-rate surviving ship of the British Royal Navy from the Napoleonic wars, the French Revolutionary War and the American War of Independence.

After having served for about four decades, the HMS Victory was, by then, suffering in poor shape. In 1922 she was relocated into a dry dock in Portsmouth and was saved from becoming a load of scraps to be a museum ship. Since then, about 25 million tourists have visited Victory, a reminder of Great Britain being the supreme naval power many centuries ago.

The USS Missouri may not have been involved in major battles during the World War II, despite having been launched and commissioned in 1944. Instead, she was the site where the Empire of Japan signed the surrender documents that finally put an end to the war on September 2, 1945.

Named after the state of Missouri, it was the last battleship commissioned by the United States. The “Mighty Mo” is said to be the “most famous battleship” ever built by the US Navy. The battleship received many medals, battle stars, Combat Action Ribbons and commendations for being part of the WWII, Korean War and the Gulf War. Throughout the commissioned years of Missouri, it hardly ever suffered a scratch. In its long career, she was an active part of combat. The battleship now rests along with USS Arizona at Pearl Harbor as a memorial ship and museum.

The USS Constitution might be very well considered as the wooden warship having the most cutting-edge technology during its time. Her strength was so astonishing that even the cannon balls just bounced off her sides, giving the Constitution the name “Old Ironsides.” Her most famous moment was in the War of 1812 where she downed five British warships.

Launched in 1797 after being built in Boston, the Constitution went on to become one of the longest-serving warships in history. And even after her active service, the 217-year-old ship is still sailing, as of 2012. Further restorations have made her intact and seaworthy. It is the US Navy’s oldest frigate still afloat. You can now get a tour of the famous ship as well as its museum in Boston.

The Union-backed USS Monitor and the Confederate-built CSS Virginia squared off during the Battle of Hampton Roads in 1862, making them the first ironclad ships to be ever engaged in a battle. Although the battle ended indecisively yet it had an impact on navies around the world. New warship ideas generated in the course of naval ship building, setting new standards.

The Monitor earned distinction as being the first ship to feature a rotating gun turret, thus changing the course of warship design in the following century. It was built during the American Civil War and the steamship sank in a storm in 1862.

The Virginia was redesigned off an old hull of the USS steam frigate Merrimack, being re-installed with immense iron plates.

These battleships were similar in structure including features and strengths of being wooden and ironclad with a shore battery.

The Confederate vessel CSS Hunley became the world’s first combat submarine to successfully sink an enemy warship. The ship played a minute and small part in the American Civil War. But it was not without her own tragedy, which is pretty unique compared to other war vessels.

Her very brief active service — on February 17, 1864 — saw her successful attack on the Union-backed sloop USS Housatonic. Before she was released for her first and only combat test though, she had already sunk twice and then been recovered during the preliminary testing.  The sinking led to the deaths of all 13 crewmembers, including her inventor H.L. Hunley.

Victory would have been sweet for Hunley after downing Housatonic. But unfortunately, she met tragedy again — and for good — when she sank down for the third and final time that evening. All eight crew members perished.

The Hunley was finally located in 1995, and five years later she was recovered after 136 years of spending itself on the bottom of the sea. She has been now well restored and preserved, with her current status being “awaiting conservation.”

The Santa Maria was a Spanish merchant vessel launched in 1460. She gained fame as one of the first ships that brought Christopher Columbus to the Americas. However, she couldn’t sail again as she ran aground in December 1492. Christopher and his men salvaged Santa Maria ‘s timbers from which they made another boat La Navidad (literally meaning “the Christmas” on account that the wreck happened on Christmas day).

Underwater explorers are still unsure about the location of Columbus’ ship though. An explorer claimed the Haiti wreck as the lost flagship’s wreckage, but UN experts debunked the claim on account of finding brass and copper fasteners instead of wood or iron.

The acronym of HMS stands for His/ Her Majesty’s ship while the Beagle part of the name was derived from a dog type. This ship was of the Cherokee class and was designed in the year 1807. It is one of the nine vessels to have this name.

The HMS Beagle gained fame as the boat that took the young naturalist Charles Darwin on his scientific explorations, in 1831. During the next four years of his voyage and expedition he wrote a book titled Journal and Remarks (published in 1839) aka The Voyage of the Beagle, a travel journal-part-scientific exploration. It is also at this point where he developed his now-famous theory of evolution by natural selection.

Apart from the Santa Maria mentioned earlier, Christopher Columbus also used two other ships: the Santa Clara (also known as La Niña) and La Pinta (“The Painted”). The Santa Maria was the “biggest” among the three, but it is still small compared to a modern yacht.

These Spanish ships bore the female name of saints as per the tradition of the times. These two smaller ships were caravel-type ships. They were nicknamed so by the crew of the ship – Niña for “the girl” and Pinta for the “painted one.” Niña was christened Santa Clara in actual while the real name of Pinta is still unknown.

These were some of the top famous ships from around the world. You can get this illustrated paperback on 300 world-famous ships with complete history and specifications of ancient to modern vessels from Amazon, if you want to know more about marine history of famous ships.