Boating is one of mankind’s oldest pursuits. Over the centuries technology has helped people to produce more sophisticated boats. However, primitive and basic vessels still exist in many parts of the world.

Although the boating history dates back some 8000 years BC, the interest dates till today, in fact, the love for sea gets stronger and deeper as one learns more about boating.

A History of Sailing in 100 Objects This book on the history of sailing will not just add more to your knowledge but extend your attachment for boating. It’s very insightful and talks about a hundred essential objects in the development of boats.  In a very simple way of writing and explaining, the author Barry Pickthall takes the reader through the evolution of sailing and shares his insights on water-borne crafts, Viking warships, modern and equipped yachts and their technologies. It is definitely a reading that you wouldn’t find so thorough and complete in any other book.

We also have some interesting historical tidbits of boats and boating for you, check them below: Here in this picture, you can see 19th-century Canadian lumber and railroad king John Rudolphus Booth at cookery mounted on a timber raft. Timber rafting is one example of boating in which logs are lashed together to make a single raft. Unlike log driving, timber rafting is definitely safer and does not require a river current to move it along. It will do fine standing in a still river. The Legendary Norwegian seafarer Thor Heyerdahl hand-built this raft Kon-Tiki in 1947. He used the raft to sail 8,000 miles across the Pacific Ocean from South America from the Polynesian islands. Log rafts have been used since the ancient era. Larger balsa wood rafts were specially constructed for seafaring journeys and these weighed as much as 30,000 lbs! Log rafts are still being used today as a mode of transportation as well as for recreation. 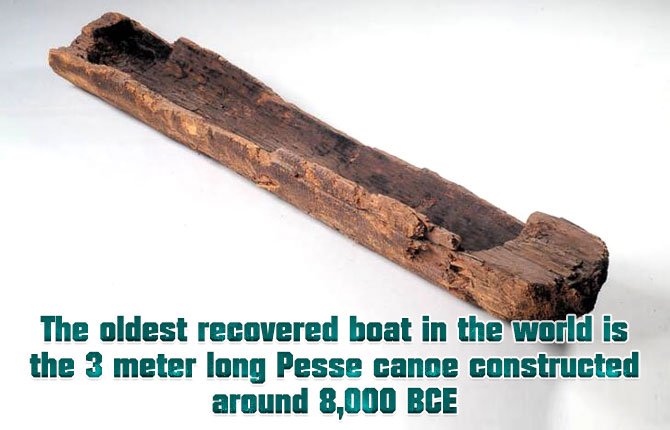 The Pesse canoe is considered as the oldest known boat, although it is believed that there could be other boats much older than that. The boat’s age is estimated to be up to 10,000 years old. Based on carbon dating, the Pesse canoe was constructed during the Mesolithic period. The Nile River was an essential part of the life of the ancient Egyptians. They heavily relied on the Nile for their drinking water, for watering their crops and for fishing. The world’s longest river has also been a major route in Egypt and other countries, and the stuff of the many biblical stories. The ancient Egyptians constructed boats to cross the river in order to get to many places in the country.

Needless to say, boating was a huge part of prehistoric Egypt, as reflected in this Predynastic Egyptian art dated 6000-3000 BCE. Other pictographs and pebble carvings unearthed by archaeologists suggest that these prehistoric boats are not mere simple canoes. It is thought that the ancient Egyptians were quite advanced and may have even developed a steering system which they used for fishing and transportation.

Dufana Canoe was first discovered by a local Fulani herdsman in 1987 but excavated in 1994 by  Nigerian and German archaeologists. The name Dufana comes from a local village of Dufana in the Fune Local Government Area, close to the Komadugu Gana River, in Yobe State, Nigeria. It is one of the oldest boats in Africa and considered as the third oldest in the world. While improved and modernized transportation have increasingly reduced the need for timber rafting (which is explained earlier), it is still regarded as important in some parts of the world such as Finland. The “boat petroglyphs” are found in the Gobustan National Park in Azerbaijan, a UNESCO World Heritage Site. These rock carvings are dated 5,000 to 8,000 years old. Thor Heyerdahl, upon seeing these carvings, was convinced that these etchings depict the ancient Viking boats. Speaking of Thor Heyerdahl again, he built his second boat Ra II in 1970. His first boat Ra had been a disastrous mid-sea failure. Despite that, Heyerdahl was undeterred. He still kept his ambitions to build an ancient Egyptian-style reed boat and take it out to sea to disprove that a reed boat is not only capable of river sailing.

Like the first boat, the Ra II was also made of papyrus reed. This time, Heyerdahl’s second expedition turned out successfully; Ra II sailed 4,000 miles from Morocco to Barbados, in 57 days. Typical houses of the Toba Batak villages have striking roofs that resemble a boat. Many Toba Batak homes also feature intricately carved gables. These boat-shaped roofs are of particular interest because the Toba Batak people actually had boats which they used to sail on the Lake Toba. Now, you may have thought that these roofs were inspired by the boats, but it is the other way around — in this case, the boats actually imitated the features of the roof. Walap is a traditional seafaring boat of the Marshall Islands. The most common characteristics of walap are the single main hull (which is typically narrow) and a float rigging beyond the sides (also known as an outrigger) to balance the boat’s stance on the water. Bamboo is also a popular material for rafts. Bamboo rafts are the most typical in Asia and can be used to cross the river or the sea. Ocean-going rafts usually require more bamboos and are powered by engines. River rafts are manoeuvred by pushing a very long pole off the bottom of the somewhat shallow waters. The size of the river raft depends on how many bamboos are to be used. The bigger the raft, the more people required to row it. Using an engine for bigger river rafts is also an option. The Benson raft is considered one of the world’s biggest rafts. It carried up to about 8,000,000 board feet of timber! This transportation method was used by businessman Simon Benson during the early 20th century, though it was not the first raft of this kind.

Benson thought up of making this huge raft in order to cut the exorbitant costs of transporting logs by railroad or ocean barge transportation. The logs (tied together by giant chains) were transported from New York to San Diego, California, where they were intended to be sold. A dugout canoe (or just dugout) is a water vessel made from the hollowed tree trunk. It is one of the most ancient types of boat simply because it uses a single material, just a huge piece of wood. Dugout canoes were first used during the Neolithic Stone Age.