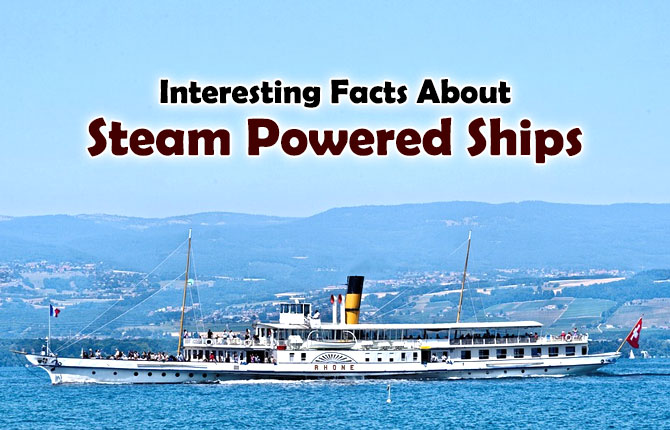 Check out those interesting facts about steam powered ships that dominated the seas especially during the Industrial Revolution era. Scottish inventor James Watt is renowned for his improvements in the steam power and steam engine technology. He invented and patented different types of steam engine that kicked off the Industrial Revolution. The potential of Watt’s invention opened up the possibility of running ships and boats run by steam engine. Claude de Jouffroy is claimed to be the first person to develop the steamboat prototypes, about 20 years before American inventor Robert Fulton did. de Jouffroy also invented the a paddle steamer. However, unfortunate circumstances such as the French Revolution prevented his progress. Steam power finally enabled ships to navigate anywhere, and anytime without relying on wind or weather to sail them. The transition of sailing warships to steam warships allowed for other technological improvements such as steam propulsion, steel body, and replacement of paddle wheels and sails with screw propellers, as well as advances in armaments such as shell gun and rifling, as well as invention of torpedoes and naval mines. Steam power would ultimately be superseded by oil as a means to fuel and power sea vessels. Located in Dartmouth, Devon, this beam engine is the world’s oldest extant engine. It is preserved as a tribute to Thomas Newcomen, who was the first person to create the the practical steam engine. The first North River Steamboat was built, launched and put in service in 1807. New York’s Hudson River, where the steamboat used as a route between New York City and Albany, used to be called North River.

The North River Steamboat was built by the wealthy politician Robert Livingston and inventor Robert Fulton. The SS Savannah was among the first hybrid steamships/sailships built during the early 19th century. The feat of being the first ship of its kind to successfully cross the Atlantic Ocean was achieved from May to June 1819, despite using the steam power for just a short duration. Steam engines were first used in mine pumps during the early 1700s. Improvements on the steam engine were developed by James Watt which ushered in the Industrial Revolution. This particular steamer is named Look Out. During the American Civil War opponents sought to control the rivers (including the Tennessee and Mississippi rivers) using steamers or paddlewheelers. Turbinia was launched as an experiment in 1894, and was tested in the waters as a demo at the Spithead Navy Review three years later. It turned out to be successful, and became the prototype for the following turbine-powered steam ships. This steamboat, Ben Campbell, was built in 1852. By the time it was completed and launched, steamboats had become remarkably faster. The earliest steam engines were initially used to pump water to facilitate deeper mining, but they were considered bulky and inefficient. The first paddle steamer to steam between Panama City and San francisco
The SS California was among the first steamships to cross the Pacific Ocean as well as the first steamship to sail from Central America to North America. She was launched in 1848 and was used to transport mail, passenger, freight and finally, coal and lumber during the Gold Rush period. In 1895, the California finally fell into disuse as she wrecked somewhere in a Peruvian province.